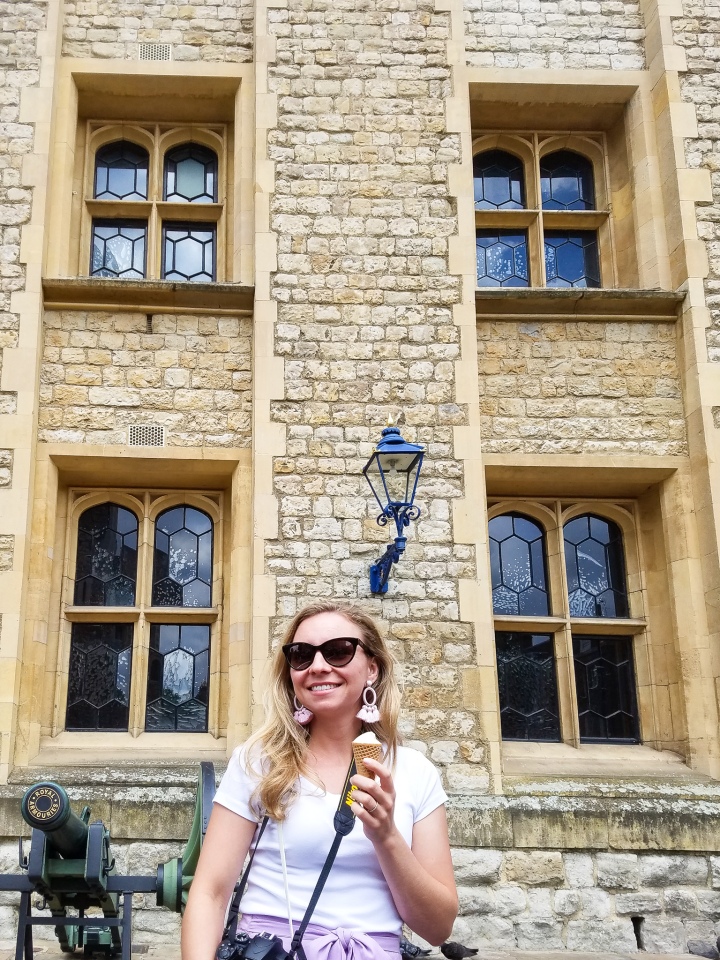 On the third day of our trip one of my worst fears came true. We overslept! It was awful but not as awful as the jet lag we were both plagued with after our overnight flight to London where neither of us were able to get a wink of sleep. In addition to being in a perpetual zombie-like state for a few days I was also dealing with vertigo, which I’ve never experienced before.

I’ll share how I dealt with vertigo, how we survived that flight and the 13 hour return flight in a later post. For now however, let me take you through our third day in London and what we did, saw, ate and the one thing I need to get back to London for! 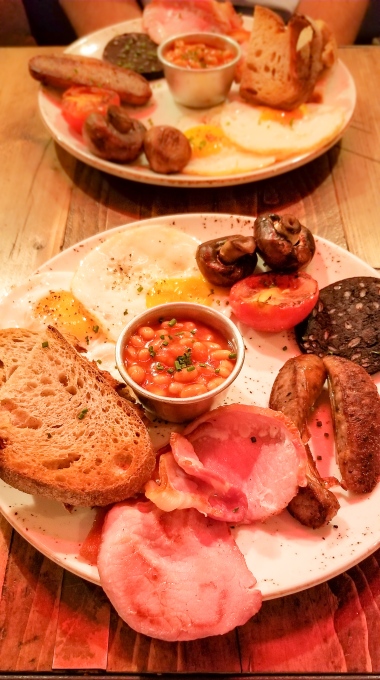 When we finally did wake up, it was yet another beautiful, sunny and warm day. We threw on some clothes and hopped on the next train to Tower Hill with finding some much-needed fuel for our action packed day as the first priority. Flock is where we ate breakfast (or I guess lunch) and it could not have been in a more convenient location – just a few steps from the Tower Hill Underground station and just across the street from the Tower of London and Tower Bridge.

Pictured above is our scrumptious and more importantly, sustaining full English breakfasts. This was both of our first experience with the traditional British dish and as someone who isn’t a huge fan of meat, I really enjoyed all of it! Minus the black pudding, but Nate enjoyed it enough for both of us, ha! Feeling full and slightly less like the un-dead, we dashed across the street to our first big adventure of the day. 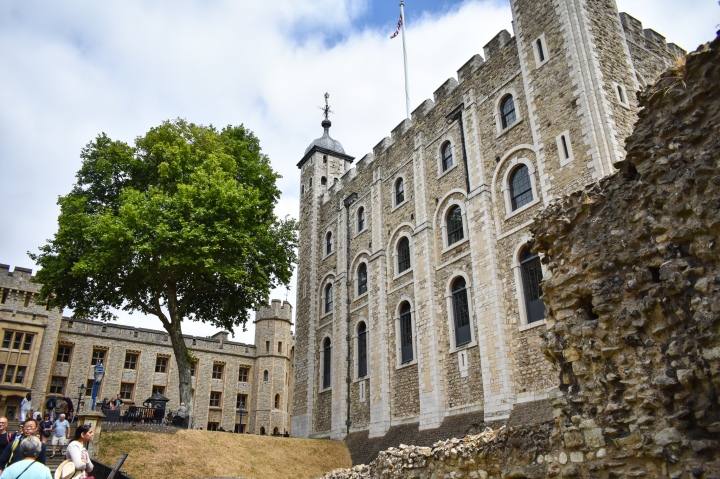 The Tower of London was not originally on the list of places to visit, but on the day before our flight I bought our tickets and I’m so glad I did!

Once the tallest building in London, the Tower has seen its share of grim history from the Two Princes to two beheaded Queens and plenty of political prisoners who have literally left their mark on the ancient stone walls wherein they were once held prisoner. 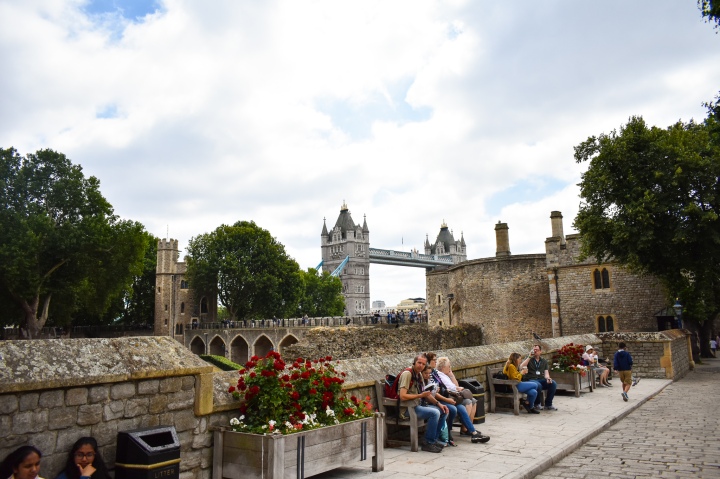 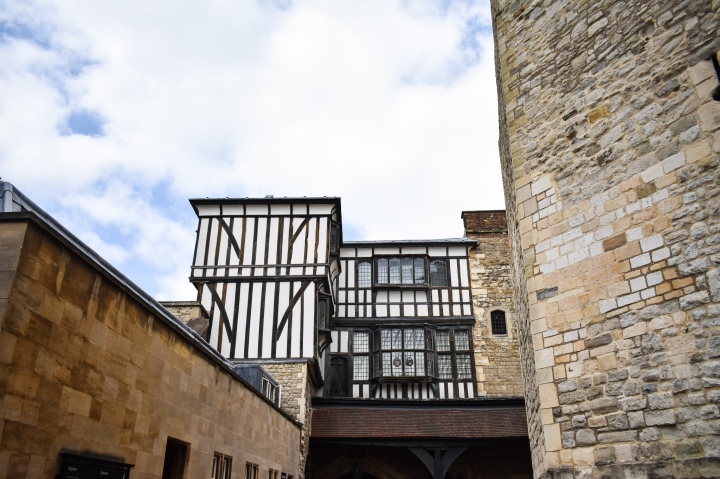 Yes, it’s full of tourists but don’t let that stop you from taking a trip to the Tower. 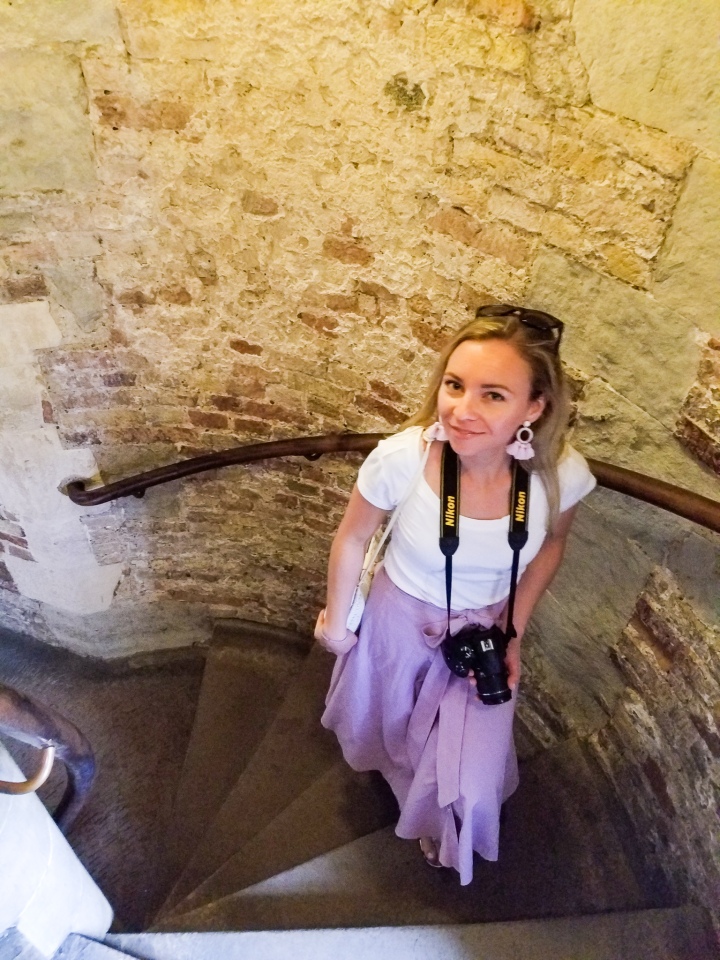 And while you’re there be sure to check out the Crown Jewels – no pictures though! The line looked long but really ended up only being a 10-15 minute wait. While we waited, we enjoyed some of the best ice cream I’ve ever had. Nate picked it up from a little stall located at the northeast corner of the White Tower and that my friends, is the thing I need to get back to London for! It was that good.

The tour through the building where the Crown Jewels are held is laid out very well for keeping traffic streamlined and never crowded. Visitors are lead through the exhibit in a line and at a pace that allows every visitor to take in the history that builds up to the grand finale without feeling too rushed. Once you get to the jewels you’re able to view them from two different angles, which we did and I recommend going through the queue at least twice to take it all in! 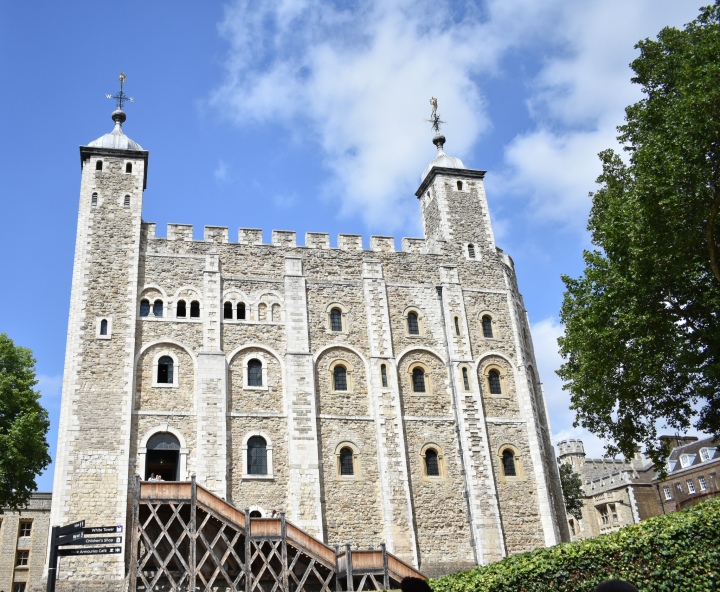 On our way out we stopped to chat with one of the Yeoman Warders. Yeoman Warder Briggs was friendly and just as we turned to walk away, he asked us if we had ever heard of the Ceremony of the Keys. I had heard of it but Nate had not. Thanks to our new Yeoman friend, we were able to get a spot at the ceremony later that night! More on that at the end of the post. 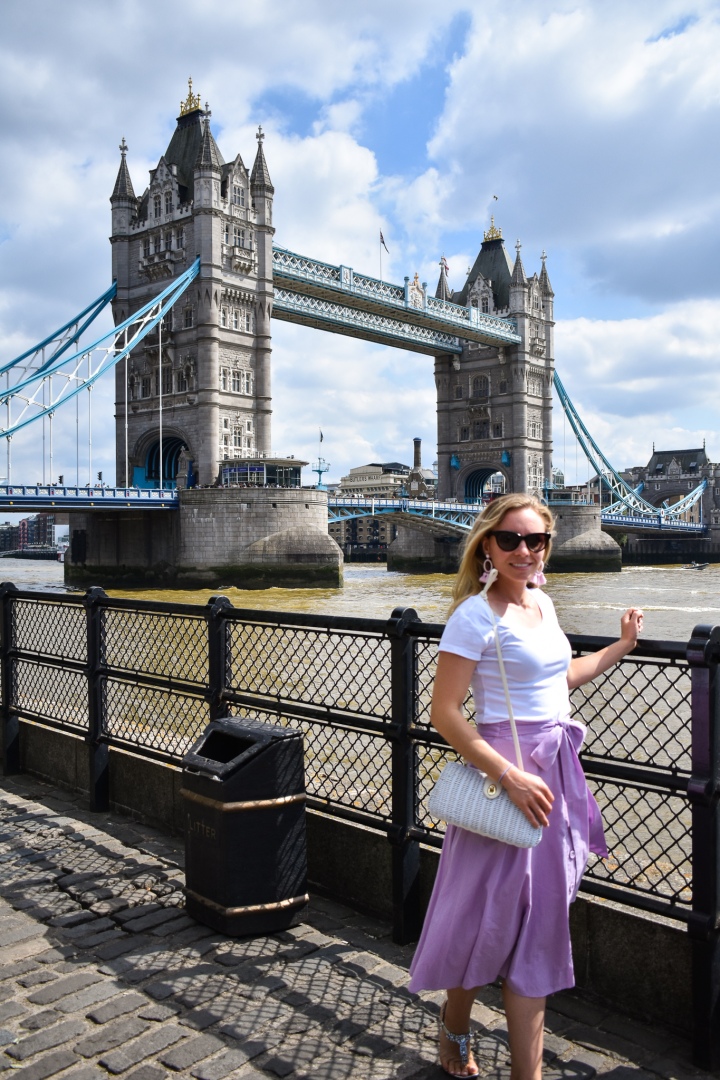 Tower Bridge behind me. We opted to forgo the bridge tour simply because we were so short on time and our list of sights to see was huge. You can go up into it and walk across and if you’re lucky, you’ll be in it as the bridge lifts up. Next time!

Once we left the Tower, we hopped back on the tube and headed over to Westminster for some more sightseeing. By the way, the tube is definitely the cheapest way to get around and so so easy to learn! I downloaded the app, Moovit and that even further simplified things. Plus, if we were ever unsure, we asked one of the people who worked there and they pointed us in the right direction.

Sadly, Elizabeth tower, or “Big Ben” as it’s commonly, incorrectly referred to was under construction and barely distinguishable. The photo above shows the best view we could get as the clock tower was completely shrouded in scaffolding. Next time!

Not wanting to waste any of the beautiful sunshine by traveling underground, we decided to walk up to Buckingham Palace via St. James Park.

DO stop at St. James Park! I found it so much prettier than – what we saw of – Hyde park and with Buckingham Palace and Westminster Abbey just a stones throw in either direction, you can take out all your birds fairly easily. There are restrooms, snacks and lounge chairs here so you can catch your breath as well.

I would have loved to walk this park at sunset, it had a really Edwardian/ Mary Poppins feel to it and for the short time we were there, we felt so at peace despite being in the middle of London.

Then up the Mall we went straight to Buckingham Palace. This imposing building exudes regality and is open to the public in August/September, so plan your next London trip accordingly – we certainly will! As I learned from our trip to the awe-inspiring Hampton Court Palace, seeing a royal palace on TV does not compare to how incredible it is to actually be there in person.

After lingering on the Queen Victoria Memorial in the delicately warm afternoon sun taking in the activity and sights surrounding us, we started to feel a bit peckish.

We walked 30 minutes from Buckingham Palace to Leicester Square to an Italian restaurant and pizzeria called Sartori and it was delish. Unfortunately, by the time we got there and got our food, we were so hungry that we gobbled it up before I could even think to get out my camera. Oops.

We split a simple spinach, bacon and avocado salad for starters then feasted on the Quattro Stagioni pizza topped with tomato, mozzarella, ham, artichokes, mushrooms and salami. Did I mention this was wood-fired pizza? Is there any other kind worth eating? So satisfying and full of amazing flavor. We topped it all of with a delightful affogato, the perfect pick-me-up for the late night we had planned!

Our friendly chat with Yeoman Warder Briggs earlier resulted in an invitation to one of the oldest, possibly the oldest ceremony still performed in the world. Sadly, no pictures allowed.

The Ceremony of the Keys has been performed as the sun sets almost every night for the last 700 years, only taking a brief pause during the Blitz in WWII. The ceremony is free to attend but you will need to get on the waiting list well in advance of your trip.

If you’re a British history nerd, this is a must! Being in the Tower at twilight as the street lamps begin to paint the cobbled roads in a glistening gold glow, a hush falls over the place in contrast to the busy bustle just hours before and of course, the thrill of witnessing a piece of history play out before your eyes is positively magical.

We happily made our way back to our home away from home to recharge for a special treat on our last day in London!

2 thoughts on “Day three- Tower of London and a very special ceremony.”

Thank you so much to all of my sweet friends for your well wishes and joyful messages on my birthday post a few days ago! 🥰🎂I am so looking forward to my 30s!! I'm off to a great start in my birthday dress from @day.dress via @shopcestmimi and my newest addition to my very small (read: intentional) bag collection 🕊
Moving to the country and leaning ever more into resourcefulness and minimizing waste has changed the way I shop for household products for my family. The more I can compost, reuse, and recycle, the better! And like you, I don't have the time to pour through thousands of pages of products in a marketplace hoping to find high-quality, sustainable items. I value the convenience of having all of that in one place, and this is where @publicgoods delivers 🙌🏻 I invite you to check them out and if you would like to give them a try, you are welcome to use my code PG-MIA20 to enjoy 20% off your purchase! 🤍
30 years old today! I was excited for this birthday since its a big one and I figured we would celebrate it somehow but #militarylife. So, since the last time I had a birthday cake was when I was a child and my mom bought them for me, I'm baking myself a cake and praying I'll be able to taste it, and that's really the extent of the celebration! 🙃
Coming to you this morning with some workwear inspo! These budget-friendly pants are amazing - look like trousers, feel like buttery smooth leggings 🤌🏻, winner. Find them linked on my LTK page! ✨ I hope you had a great Thanksgiving weekend! We certainly did, and I'm finding it hard to snap back out of holiday mode and into homeschool mode today 😅. Happy Monday!