On day two of our London adventure we woke up to a beautiful, cloudy, 60ºF morning…in July. Perfect summer weather if you ask the hubby and I!

Hampton Court Palace has been #1 on my list of places to see in England for well over a decade now! I am a Tudor history nut, so it has always been my dream to visit the home of the infamous King Henry VIII and his six wives.

This enchanting 16th century palace is just a short train ride from Kensington where we were staying via the tube then an above ground line, which cost right around 5-10£. It’s a quick trip and definitely worth some of your time in London, even if you’re not a Tudor history nut like yours truly! 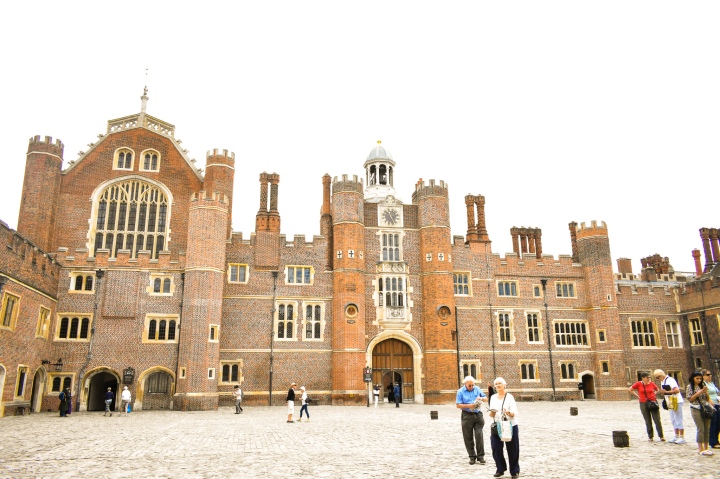 These photos show the remaining 16th century portions of the building and naturally, pictures just don’t do it justice. Hampton Court Palace was originally built by Cardinal Wolsey for Cardinal Wolsey, but once King Henry VIII set eyes upon it he decided it was his. Typical Henry, SMH. Hampton Court would see a succession of wives (two of whom were beheaded), Kings and Queens and a fantastic Baroque renovation that you’ll get a glimpse of later in this post.

As soon as we entered through the main gate, we had to pause for a minute and take it all in. Not only was a lifelong dream of mine coming true, but the sheer size of the place, the details in everything from the layout of the stones on the ground to the symbols dotted throughout the architecture and the feeling of being transported back to the 16th century was pure bliss.

, WHEN you go to Hampton Court be sure to look up, take many long pauses, talk to the staff and since photos are allowed almost everywhere, snap away! 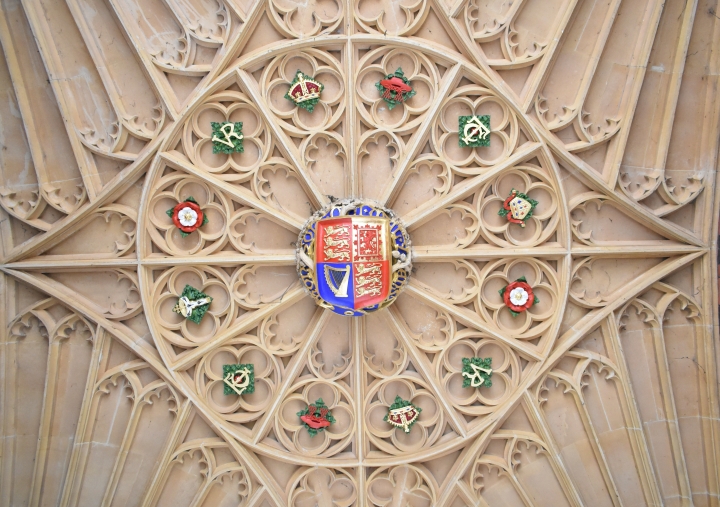 The attention to detail is mind-boggling and so remarkable! Nothing was overlooked and it seems as though no cost was spared in the construction and design.

This leads to the wine cellar, kitchens, different food storage rooms and even Tudor era offices.

After spending a few minutes in the Base Court, we picked up our free audio tour and a few maps (critical) and made our way into the Great Hall and WOW.

I have seen the Great Hall in movies and TV shows, but no camera or angle does this awe-inspiring room justice! We spent half an hour or more in here just listening to the tour, then exploring every corner of the room!

Again, look up! There are so many details in the ceiling that you don’t want to miss! One such, is the eavesdroppers. Little faces peering over the beautifully carved wooden beams – or eaves – that serve as a reminder to courtiers that someone is always watching and listening! Naturally, we were on our best behavior.

These shimmering tapestries are original and are quite faded despite restoration. It’s hard to wrap your head around the fact that a tapestry that was woven hundreds of years ago is still intact and still so beautiful! Why tapestries and not paintings? Tapestries were far more expensive and grand, and really showed off the owner’s wealth and prestige. Note to self: commission tapestries for my home.

The two photos above are of the Great Watching Chamber where people would gather and wait to hopefully catch the eye of King Henry VIII. We were a bit late for that unfortunately, but still felt the rush of being in this ornate room which was once occupied by the King himself!

The palace is set up wonderfuly for touring, but it is easy to get lost because its HUGE. Once we saw every room guided by the audio tour, we went back through it again, spending a total of four hours at the palace and not even getting to the maze garden or a few other rooms in the palace!

We stopped for a spot of lunch and some necessary coffee at the Fountain Court Cafe located of course, in the Fountain Court. The food was really pretty good, so if you’re there during the high season when it’s open, I recommend grabbing some refreshments there. After our lunch, we headed to the new part of the palace. “New”.

Enter the Fountain Court and the Baroque side of the palace, commissioned by William III and Mary II, 1689.

This interior courtyard is so peaceful – you’re serenaded by the patter of the water from the fountain splashing into the pool and the tap-tap of shoes on the stone portico that frames the courtyard, with the occasional chime of ancient bells. A perfect spot to take in the details and symmetry of the Baroque portion of Hampton Court, while also seeing bits of Tudor architecture peeking out from behind.

Next, we glided up the King’s staircase and admired the floor to ceiling artwork. My favorite part of this room? Right where I’m standing and the whole way up, the stone stairs are worn down from centuries of feet climbing those steps in the very same path I took on this day. That is actually one of my favorite things to find in any historic building, it just shows that there was life here, because sometimes these amazing places seem a bit surreal.

Then through a series of stately rooms learning the extremely regimented and prescribed way royals lived in the late 1600s. Very interesting!

A little while later we made our way out to the gardens.

Visiting Hampton Court Palace in July means you’re treated to 1) Perfect weather – it got up to about 74ºF, and 2) fragrant flowers in bloom!

Raise your hand if you want your garden to look this good!

Some of the gardens are off-limits for walking, which is fine because they would probably not look as pristine if tens of thousands or more tourists were allowed to walk through them.

Can you spot the first Queen Elizabeth’s insignia in the photo above?

This photo looks out at the vast Privy Garden, a Baroque addition. Linger here, it is so serene despite being in the middle of a suburb!

Then on to the Great Fountain Garden (Great Fountain not pictured LOL). How fun are these Yew trees!? Not only cute, but also hundreds of years old! If only they could talk, the stories they could tell! *sigh*

Hampton Court Palace has captivated my interest for over a decade. If you’re a Tudor history lover like me, it will be a trip you never forget. Even if you’re not a history nut, Hampton Court should still absolutely be at the top of your list of places to see simply because of how well preserved it is and what an amazing look back in time to not just one but two distinct eras. There is SO much more to it, inside and out, that I did not get pictures of (like the chapel…OMG…and the Magic garden, the list goes on) but even the photos that I am sharing can’t prepare you for how magnificent Hampton Court is!